I have always found the narrative at the beginning of the book of Exodus to be somewhat abrupt when describing the change of regime that occurred in Egypt. The opening paragraph relates how the Jews prosper and increase in number and then all of a sudden there is a very unsatisfying “A new king arose over Egypt who did not know Joseph” (Exodus 1:8). It seems to jar with the previous paragraph, which suggests the Jews flourished precisely because of Joseph’s legacy, so even if this new Pharaoh was not acquainted personally with Joseph, it appears strange to think he had never even heard of him.

Just in time for the Passover season, a new exhibition at the Israel Museum called “Pharaoh in Canaan, the Untold Story” helped me to understand this anomaly. According to museum guide Roni Peled, the one paragraph at the beginning of the book of Exodus actually corresponds to a time period of 350 years, which would help to explain this new Pharaoh’s ignorance. The whole subject of the Exodus is one of those contentious topics where historians, archaeologists and adherents of the Bible clash. Whilst no archaeological evidence has yet corroborated the Exodus story, Peled says we must emphasise the word “yet”. He posits the Egyptians have no incentive to dig any deeper and unearth evidence that would support the biblical account. That is very different from saying we have conclusive proof it didn’t happen.

According to most historians, the Hyksos are the group most commonly identified with the Jews who went down to Egypt from Canaan, as related in the book of Genesis. Known as a population who spoke a western Semitic language, they left Canaan gradually around 1750 BCE and went on to succeed beyond their wildest dreams in their new homeland. As their power increased, they ended up controlling Northern Egypt for the next 200 years or so. This included the area east of Goshen, which is where we are told in the Joseph story that the Jews settled. The book of Genesis stops its narrative at the time of Joseph’s death, and except for the brief description mentioned above we know nothing more about the Jews in Egypt until they are enslaved. 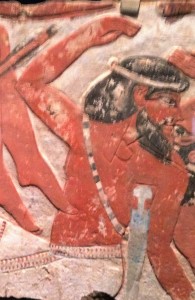 Egyptian sources relate that after about two centuries the Hyksos were unceremoniously kicked out of Egypt by the rulers of Southern Egypt with whom they had continuously fought. Approximately 3,500 years ago the newly united Egypt then conquered the Land of Israel, or Canaan as it was called back then. The first military conquest was under the aegis of the Pharaoh Thutmoses III. Thanks to the military journal he kept, we know the exact route of his army which had its first decisive victory at Megiddo. Bet Shean, Jaffa and Gaza were also important military strongholds. This was the start of 300 years of Egyptian rule here, a period that has been largely ignored until today. Many of the archaeological remains from that era are now being displayed. Some have been loaned from museums in other parts of the world and are being shown together with local finds for the first time. They help us build a picture of how Jewish and Egyptian cultures existed side by side. 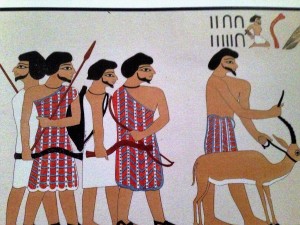 Egyptian art depicts the Canaanites as bearded, in stark contrast to the clean-shaven Egyptians whose gods were the only ones to sometimes sprout facial hair. For obvious reasons, the Canaanites are always shown on the losing side in battle scenes. In reality, they changed the nature of weaponry by introducing bows and arrows made of ivory, bone and wood which added extra shooting power. They also brought carriages onto the battlefield for the first time.

The grandeur of Egypt is represented by an abundance of sphinxes (part of an exceptionally fine specimen was recently found in Hazor), scarabs and statues of Pharaohs, as well as an impressive reconstruction of the gates to Bet Shean. When the Egyptians ruled over Canaan, naturally they brought with them their own traditions and customs, but they were not averse to modifying them in accordance with regional styles. For example, in the Governor’s residence in Bet Shean, workmen built with Egyptian mud bricks, like those we read about in the biblical narrative, but here they combined them with Canaanite stonework. In another instance, what were initially thought to be imported Egyptian pottery vessels were actually found to be produced in a workshop in the area around Afula. However, the addition of handles to their amphorae is a custom they took from the locals. In a pottery jar which originally contained beer, which was an Egyptian invention, excavators were lucky enough to discover a fine collection of jewellery that had been wrapped in cotton and buried in mud. A separate discovery was a gold ring belonging to the Pharaoh Tutankhamen, the only reference to him ever found here. 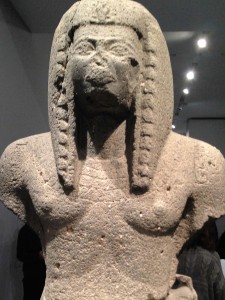 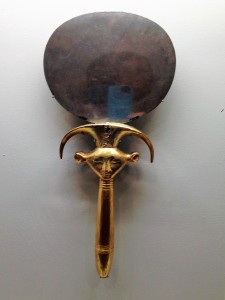 Another fascinating artifact is a woman’s silver mirror that was found in the grave of three women who all had Semitic names. This brings to mind the explanation by Rashi (Rabbi Shlomo Yitzhaki, the French medieval biblical commentator), how after Pharaoh began to oppress the Jews in Egypt the men lost hope in the future and no longer wanted to procreate. Using their mirrors, the women tempted them to have intercourse and thus ensure the future of the Jewish people. Later on, in the desert, the women donated their mirrors in order to construct the basin in the Tabernacle.

A further object which had great significance was the rod or staff and we see several depictions of leaders holding one. Perhaps that is why both Moses and Aaron each had a staff that with G-d’s help was used as a very special status symbol to great dramatic effect. Amongst the other miracles they performed, Aaron’s rod turned into a snake that ate up the snakes of all of Pharaoh’s magicians and later turned the waters of the Nile to blood. Moses’ staff was used in the desert in direct contrast to these earlier miracles; Moses caused water to flow from the rock and created an antidote to snake bites with his staff. Once the children of Israel began to accept Moses and Aaron as their leaders and began to understand the divine force behind them that enabled them to perform the various miracles, the rod assumed a diminished role. The people had moved on to a new phase in their spiritual journey and their leaders no longer needed the trappings associated with power in Egypt to command their respect.

Jewish commentators suggest the children of Israel merited redemption from slavery because they resisted the lure of assimilation. A number of reasons were given: they kept their Jewish names, language and dress code. They also didn’t gossip and weren’t promiscuous. Interestingly enough, there seems to have been considerable Canaanite influence on the Egyptian belief system. The Egyptians had no qualms about integrating foreign gods with their own. As well as the sun gods and the well-known figure of the goddess Hathor, they were quite happy to pay homage to Canaanite imports such as Astarte, the goddess of fertility and other deities. We see several pictorial examples and engravings which show how the Canaanite gods were incorporated into the Egyptian pantheon. 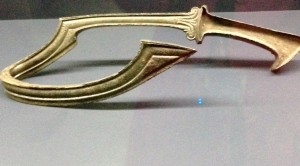 There are many remarkable artifacts on display, but for me, the last object of the exhibition is the most poignant. It is a sickle sword or scimitar, which has been intentionally bent in order to signify the death of the soldier in whose tomb it was discovered. It was a lethal fighting tool as it combined the advantages of the battle axe as a weapon that could deliver a crushing blow, together with the power of the sword. Another very similar scimitar that was also bent in this fashion was found in the tomb of Tutankhamen. This has led archaeologists to speculate that maybe that weapon was manufactured here in Canaan. An alternate theory is the weapon we possess, may have been a present from the Egyptian Pharaoh to one of his vassals . In 1979, a copy of it was presented by Menachem Begin to Anwar Sadat on his visit to Egypt a week after the peace treaty between the two countries had been signed. It symbolized the hope that in the words of Isaiah (2:4) “And they shall beat their swords into plowshares…Nation shall not take up sword against nation; they shall never again know war”.