The Circle of Life

Posted on February 9, 2016 by IsraelDays

One of the many things I love about Israel is the interplay between ancient and modern; the ability to connect between the very new and the very old, often in the most surprising ways. Theodor Herzl was perhaps the first to understand this juxtaposition in his prescient book which described his vision of the Jewish state. He titled his oeuvre “Altneuland”, or “Old/New Land”. The founders of Tel Aviv used this as their inspiration for the city’s name. They took the word “tel”, which suggests layers of ancient civilization and combined it with “aviv”, which means “spring”, with all its connotations of renewal and rebirth.

The diverse ways in which Israeli technology or thought is harnessed to ancient history or ideas, never ceases to inspire me. Let’s take, for example, the very modern concept of nanotechnology; a process in which scientists can manipulate and control individual atoms and molecules. Their precision is so great that they have developed a measurement called the nanometer which is one billionth of a metre, or about as long as your fingernail grows in one second!  In an attempt to make this remarkable breakthrough more accessible to the public, what vehicle did professors at the University of Haifa use as their medium? None other than the Hebrew Bible, making the shrewd connection that civilization and technology are closely linked. By taking one of man’s oldest and most widely read manuscripts and engraving all of its one million, two hundred thousand letters onto something the size of a sugar crystal, they utilized ancient methods in the most ultra-modern manner. It took them an hour and a half to produce! They chose the Bible, because to them it signified the transmission of human civilization from one generation to the next and through it, they wanted to alert people to the scientific revolution that is taking place in our times. If you would like see this marvel for yourself,  it is displayed in the Israel Museum next to the hall where the Dead Sea Scrolls are exhibited. Bearing in mind that the written word as a medium for conveying ideas has outlasted all kinds of technologies, the significance of this venue should not be overlooked. 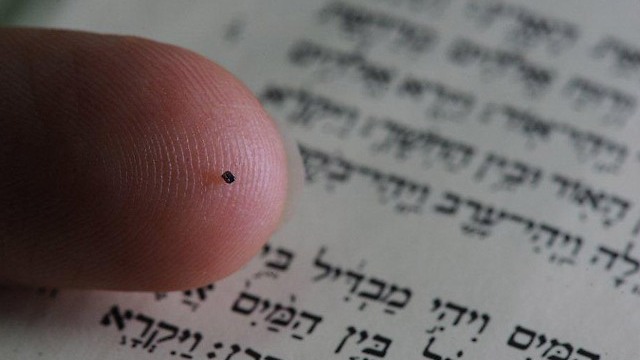 Farming has played a vital part in Israel’s existence. The Bible is replete with descriptions of the produce of the land and remains of ancient agricultural terraces can still be seen in many parts of the country. According to Jewish thought, the land, the people and our religion are inextricably intertwined. Our first Prime Minister, David ben Gurion, had a vision of greening the desert in order to absorb the immigrants that would come to live here. He set a personal example by relocating to the Negev kibbutz of Sde Boker, echoing the words of the prophet Isaiah “The arid desert shall be glad, the wilderness shall rejoice and shall blossom like a rose” (Isaiah 35:1-2). Since then we have not been short of modern green prophets who are doing their utmost to bring this vision to fruition. One of the most recent visionaries is Russian immigrant, Bentsion Kabakov, who has literally turned the idea on its head. He has created a 4,500 square metre rooftop greenhouse on the edge of the desert, growing hydroponic (soilless) vegetables and herbs. Using the latest technology, including mineral enriched woolen bedding instead of earth, a conveyor belt system and recycled water with a specific cocktail of nutrients for each variety, he can grow close to three times as much produce per square metre than traditional methods allow. The beauty of his project is that it is so easy to duplicate. Whilst the idea may have originated in the desert it is equally applicable to urban environments and any roof has the potential to grow the same abundant crops. It seems that the sky really is the limit! 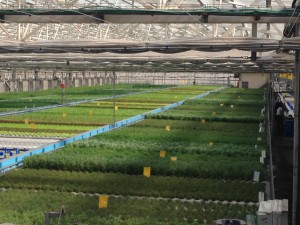 In an ironic twist, this new breed of hydroponic products is causing some rabbis to rethink the rules regarding the blessings religious Jews say before eating fruit and vegetables, which have been in place for hundreds of years. Up until now, it was obvious that when eating a lettuce, for example, the “Hadama” blessing was said, which talks about thanking G-d for creating “the fruit of the ground”. However, now these vegetables are not necessarily grown on the ground or even in soil, there are some who suggest that a more appropriate blessing is the ‘Shehakol” which praises G-d “through whose word everything came to be”.

One of the many biblical descriptions of the Land of Israel refers to it as “the land of milk and honey”. The honey was not that produced by bees, but came from dates which were abundant in ancient Israel. Jericho and the surrounding Dead Sea area were famous for their dates in biblical times, but actually date palms grew as far north as the Galilee. They were featured on coins of old and can also be seen on today’s modern ten shekel coin. Dates need to be cared for in order to prosper and the numerous invasions by foreign armies and the destruction they caused eventually led to the demise of the industry. In 1948, after the creation of the state of Israel, a tremendous effort was made to kick start date cultivation and that is another story of its own.

In the mid 1960’s during excavations at Masada, archeologists unearthed a small clay jar with a pile of date seeds inside which were deemed to be from the time of King Herod. Carbon testing bore out that theory. Their discovery was then forgotten for the next forty years! In 2005, as part of her research on germination of ancient seeds, Sarah Sallon, the director of Hadassah’s Medical research centre, was curious to find out if a two thousand year old seed could in fact grow. She wanted to see what the original Judean date was like and if it contained any of the healing properties that were attributed to it, which ranged from fertility and aphrodisiac uses to protection against infections and tumours.

At this point, Sallon contacted the Arava Institute for Environmental Studies at Kibbutz Ketura and asked for their help and expertise. Agriculture expert Elaine Solowey was then tasked with the project of planting the seed. She nicknamed her new charge Methuselah, after the oldest person mentioned in the Bible. Amazingly enough, under her tender care Methuselah germinated and proved to be a pollen producing male. Today he is over three metres tall and his pollen has been used to pollinate a female date plant.

But Methuselah was only the beginning, as Solowey has successfully managed to grow other saplings from ancient seeds discovered in archeological sites in the Dead Sea area, including two female strains. Ideally, she would like to be able to plant an ancient date grove to better understand the local diet in biblical times. In order to duplicate the original Judean date these female saplings grown from ancient seeds would need to be pollinated with the pollen from Methuselah. It all seems a little fantastical, but with determination and not a little patience and skill, it seems ghosts of the past really can be brought back to life.