Posted on September 6, 2015 by IsraelDays

Israel is frequently referred to as a “Start-up Nation”, owing to the originality and success of its hi-tech industry entrepreneurs. The moniker is taken from a book of the same name by Saul Singer and Dan Senor, published in 2009. Whilst certainly applicable today, this term could equally have been employed in the late 19th century when a group of young, forward-thinking Jews from Jerusalem asked for help from the French “Alliance” organization to buy land in order to teach the local Jews how to farm. Theirs was an extremely unusual request, as at this time the majority of Jews in Palestine lived in one of the four holy cities of Jerusalem, Hebron, Tiberias and Safed and depended on handouts from Diaspora communities for their livelihood. The organization was so impressed with their initiative they willingly acquiesced. 2,600 dunams (approximately 750 acres) of land was bought from the Turkish sultan, on which to set up an agricultural training school. In 1870, Charles (aka Karl) Netter, the secretary of the Alliance organization, personally came to the country to establish it.

Mikveh Yisrael, today located on the outskirts of Holon, was to play a crucial role in creating towns and agricultural settlements throughout the country and educating generations of farmers how to utilize the land. Over the years it took in waves of immigrants, from the pioneers of the First Aliya movement, to holocaust survivors, to the more recent arrivals from Ethiopia and the former Soviet Union. Currently, the school has over a thousand pupils and teaches boys and girls, secular and religious, native born Israelis and their newly arrived counterparts in a true melting pot of traditions and cultures.

In the beginning it was not so easy to attract pupils and Charles Netter had to actively recruit his first charges. Seeing a boy lounging around on a Jerusalem street corner, Netter approached him and persuaded him to come to study in Mikveh Yisrael. His widowed mother, who was struggling to make ends meet, was very happy for her son to be looked after and given an education and readily agreed. Ideals preceded facts on the ground and Netter and his young protégé were forced to live in a cave on the premises for lack of anywhere else. Eventually buildings went up and the student body grew and the first agricultural school in the country was well underway. A number of important events and innovations took place there. 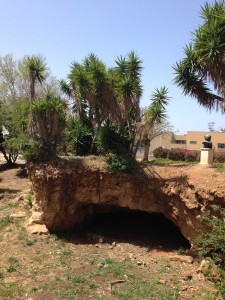 Netter had a vision that he would like to produce wine made in the Land of Israel and, in 1873 (a full nine years before Baron Rothschild established the Carmel Winery), began to quarry wine cellars out of the local sandstone. Sadly, he didn’t survive to see the project completed. Once the Rothschild wineries came on the scene, Mikveh Yisrael was unable to withstand the competition and their wine production stopped. But later on the cellars were to prove useful in another way, as secret hiding places for Hagana weapons and ceremonies. These days they are somewhat dusty, but still home to some vintage bottles. 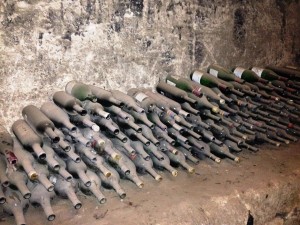 Avraham Yoffe was a young boy when he was brought to Mikveh Yisrael on a Friday school outing. He had heard rumours that in the long defunct cellars there were still some bottles of wine remaining from the early days of the winery and he broke away from the rest of his group to try to find them. He was having such a good time that he failed to hear the bus arrive to take all his classmates home and was stuck there until Sunday morning when students and staff arrived back from the weekend. At the age of 16, he joined the Hagana and once again familiarized himself with the cellars in Mikveh Yisrael, this time used for a different purpose. He went on to become a general in the Six Day War and a member of the Knesset for the Likud party. So it seems he was not too scarred by his early experience.

Although it was surrounded by Arab villages, during the War of Independence, Mikveh Yisrael was seen as an important post to secure the route to Jerusalem. The Hagana had a base there and they made good use of the blacksmith’s workshop, where they mended and upgraded their weapons. David Leibowicz was a new immigrant from Russia who taught mechanics at the school and during this time he invented a large mortar. It wasn’t particularly accurate, but the tremendous advantage it had was the terrifyingly loud noise it produced. There are many stories about the Arabs fleeing in such haste when the mortar was fired, that they left half-drunk cups of coffee on the table, because they thought the Israelis were approaching with a huge army. This weapon was named after its creator and became known as the “Davidka”. You can visit the restored workshop and even see one of Leibowicz’s prototypes standing there, together with items that were once used in everyday life by members of the community and serve as a great trip down memory lane. 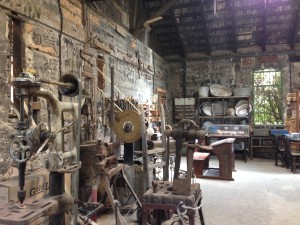 Another innovation, which residents of Mikveh Yisrael boast had its origins in their school, was the “kova tembel”. That quintessentially Israeli sun hat that every self-respecting kibbutznik or farmer once wore. There are even those who say it was originally known as a “kova mikva’i” after the place it was invented.

Perhaps the best recorded incident that took place at Mikveh Yisrael was in 1898 and that was the meeting between Theodor Herzl, founder of modern Zionism and the German Kaiser, Wilhelm II. Herzl had hoped to gain the Kaiser’s support for the establishment of a Jewish homeland in Palestine and engineered a conversation with him as he stopped with his entourage on his way from Jaffa to Jerusalem. In those days, the “Jerusalem Gate” was the main entrance to the village and a memorial depicting the historic conversation between the two gentlemen at this site 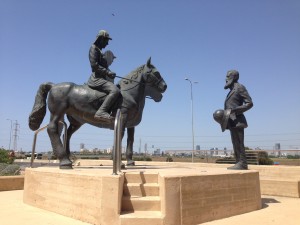 Although computers and hi-tech were still a figment of the imagination in this era, a botched photograph of the encounter led to what was maybe the world’s first Photoshop attempt. For some reason, the photographer that was entrusted to document this momentous occasion failed to get anything other than Herzl’s left foot in the picture. Realising the important public relations opportunity afforded by such a 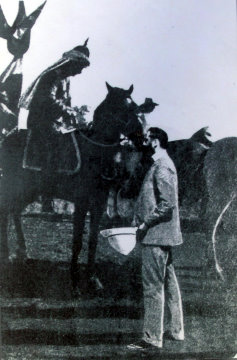 photo, Herzl insisted on a creative reconstruction of the meeting. Another photograph was taken of Herzl by himself and this image was superimposed next to an image of the Kaiser in all his regalia. In order for this to work, the Kaiser also had to be moved from his original white stallion and grafted onto a black one that had stood beside him. Fortunately, the Kaiser never caught on and the doctored photo was used to suggest the Kaiser’s support for Herzl’s dream. 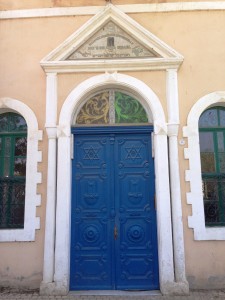 A path leads straight from the gate to the beautifully decorated synagogue. Although construction began in 1870, it took until 1895 for the building to be completed. Agricultural tools form part of the embellishments on the façade and also appear as motifs on the metal grilles protecting the windows.  Inside there is the rather unusual feature of two bimot (lecterns from which the torah is read). One suggestion for this anomaly is that the synagogue was used by both Ashkenazi and Sephardi communities. Ashkenazim traditionally read the torah at the front of the room, whereas Sephardim have their torah reading located in the middle, this way both sets of congregants could feel at home.

After completing a tour of the agricultural school, it is well worth walking a few extra metres to the Mikveh Yisrael botanical gardens, which contain a huge variety of trees and plants. Their initial purpose was to discover which foreign trees could be adapted to local conditions and to give the students a chance to experiment. This peaceful haven is home to all kinds of exotic species and helpful signs explain the origins of each one.

Despite the fact that the agricultural school is usually only open for visiting groups, during the holidays the site is also accessible to families and individuals. It is a heartwarming experience to visit this off-the-beaten-track testament to Israel’s pioneering and innovative visionaries. Its importance can be summed up in the words of David Ben Gurion, Israel’s first prime minister, “If Mikveh Yisrael had not been established, it is not at all certain that the State of Israel would have been created”.