During this period where foreign travel opportunities are limited, it seems a good idea to introduce a couple of locations that even those locals who think they have been everywhere, may find interesting. Both of them are in the Golan, where there is a huge array of different activities to choose from: hiking trails, off-road jeeping, ancient synagogues, agricultural experiences, historical sites and museums and some excellent wineries, to name but a few. Traveling around the Golan, one cannot help noticing the natural black basalt stone scattered throughout the area, which is created from the cooled lava from ancient volcanic eruptions. It is in striking contrast to the bright white limestone of Jerusalem and creamy chalk and pale dolomite, or sandstone rocks found in most of the rest of the country. 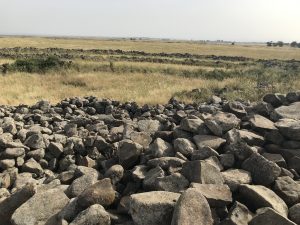 Whilst Israel is well-known for its biblical archaeology, it may surprise you that we have our very own version of the fictional Craigh Na Dun (for “Outlander” fans) or the very real Stonehenge. Whilst both those structures are composed of standing stones in circular formations, our Rujum el Hiri or Gilgal Refaim also consists of concentric circles of stones that date back thousands of years, but in a slightly different format. Located, in a hard to access spot on the Golan Heights, a few kilometres from Moshav Yonatan, it is somewhat off-the-beaten track for your average tourist, although the 120 km Golan hiking trail passes right by it.

The more than 42,000 large stones used to construct the site are field stones. That is, uncut by any metal object. Because of the many thousands of hours archaeologists estimate it took to build and the engineering skills it required; they suggest that the structure was created by people at a time when society already lived in communities. There have been various theories as to when this happened. The most recent research dates it to the Chalcolithic period or Early Bronze Age, around 5000 years ago, the same time as the Egyptians were building the pyramids. 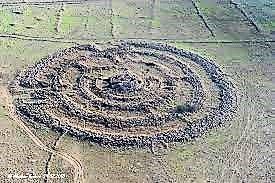 Rujum el Hiri is the Arabic name of the place. “Rujum”, refers to a pile of stones, often created as a burial mound. We see ample evidence of ancient tumuli or burial tombs dotted throughout the Golan landscape. “Hiri”, is a wild cat, which requires a greater leap of imagination. The Hebrew, Gilgal Refaim, which means “Wheel of the Spirits (or Ghosts)”, is no less evocative. Another possible meaning for “Refaim” is mentioned in the bible.  In the book of Deuteronomy (3:11) Moses recalls the refaim giants who lived in the Golan. He mentions the massive dimensions of Og of Bashan, who was their king, whose bed was nine cubits long by four cubits wide. As the height of your average man in those days was between three to four cubits, Og must have been a terrifying sight. We may never know if this place was indeed constructed by giants, but we do know that the total weight of the rocks used is over 40,000 tons.

For the greatest effect, the site is best viewed from above. It was discovered by chance in 1967, by an Israeli Air Force pilot after the Six Day War.  He saw this unusual structure in the form of huge circles and archeological experts were promptly dispatched to discover what it was. They used Syrian maps to get there and on arrival, they found a triangulation station (used for surveying purposes), on the highest point.

The centre of the structure is a 20-metre-wide mound, inside which there is a chamber. This inner room is built with circular stones, which led researchers to believe it was constructed about a thousand years later than the outer walls and possibly used as a burial tomb.  No human remains have been found.

Several lower concentric circles of stone surround this central stack. In certain places, lines of stones connect one circle to another. Whilst we can never be certain, this seems to have been an early form of calendar by which the yearly equinoxes and solstices could be determined. On those days, the rays of the sun form a line that runs between the stones on opposite sides of the circles. Possibly, this information was used for agricultural purposes, to find the optimum period to sow or harvest the crops, or perhaps for the community to pray to their deities that their efforts would succeed. The location continues to attract modern mystics and back-to-nature spiritualists, who gather there and visit on the summer solstice to watch the rising sun cast its rays over these ancient stones.

Dotted along the roads in the Golan there are also remnants of more modern times, such as former Syrian villages or army barracks. The “Emir’s Palace”, is in an easily accessible location, by the side of the road near the Wasset junction. The Bedouin, Arab-el Fadl tribe were important and influential landowners whose centre was here, even though they also owned lands in the Western Golan and the Hula valley. It was built by the prince of this aristocratic clan as his summer home and must once have been a magnificent palace. 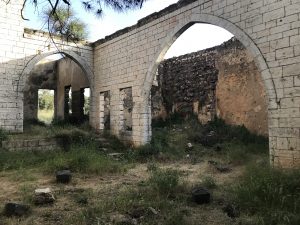 Constructed in the early 1900s, the palace had three courtyards, an outer one for entertaining the local tenant farmers, a central one for important guests and, in the west wing, an inner, secluded courtyard with a fountain, for the ladies of his harem. No expense was spared in decorating and the floors were ornamented with mosaics and pebbles from the Snir and Jordan rivers. From the upper rooms you could see Mount Hermon and the surrounding area.

The Emir himself lived in Damascus and was part of the city’s social elite. In 1948, this palace together with the rest of his lands in the Golan Heights was taken by the Syrians, who viewed him as a security threat and confined him to the Syrian capital. Later agrarian reforms led not only to the confiscation of his land, but a substantial loss of income. His winter palace was in the Hula Valley, and in 1940, when his son ran into financial difficulties, he sold it to the Jewish National Fund. Today, part of it is incorporated into the dining room in Kibbutz HaGoshrim. 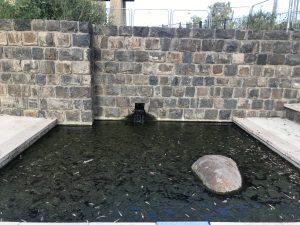 In the park next to the palace is a spring, unique in Israel to the Golan Heights. It is known as a lava-flow spring, which is a geological occurrence that only exists in volcanic areas. The water flows under the lava and comes out of the ground at the exact point that the lava stopped flowing. A small sculpture park and little wooden bridges complete the picturesque site.