Santa In The City – A Winter’s Tale

One of the novelties of coming to live in Israel is the way that the holidays are celebrated. Not just in terms of religious observance, but small, public acknowledgements of the Jewish calendar. Festival greetings are displayed on the buses and appropriately themed fairy lights illuminate the night sky. Local traditions such as eating doughnuts on Chanukah or seeing the wide range of colourfully decorated booths on Sukkot, enhance the overall experience.

Jerusalem is an important location for adherents of Christianity and Islam too. The medley of church bells and calls to prayer of the muezzin are a daily reminder of the interconnectedness of life here. The culturally aware understand the plethora of flashing lights and appearance of bottles of date juice and iftar delicacies in the Old City markets signify the month of Ramadan, and decorated eggs hint that Easter is approaching. But with few exceptions (the interdenominational YMCA which serves Jewish, Muslim and Christian residents of the city being the salient one), it is easy to miss the festivals and nuances in the religious calendar of those communities of which you are not a member. 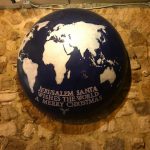 The wintry scenes frequently depicted on Christmas cards, seem a far cry from the traditional locations where Christianity began. In fact, the evolution of the modern Santa Claus is a convoluted development spanning hundreds of years. The imaginary, well-loved character is loosely based on the Greek Saint Nicholas, a bishop in Turkey in the third century, who was adopted as a patron of several groups, including children, and also known as a magical bringer of gifts. In Holland, December 6th, the date of his death, is still celebrated and the name Santa Claus comes from the Dutch Sinterklass, based on Saint Nicholas. 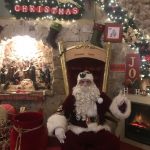 After the Protestant Reformation in the 1500’s, saints were frowned upon in Europe and celebrations moved to December 25th where gifts were now brought by the baby Jesus. But that wasn’t a very practical solution as his carrying capacities were limited, and so he needed a helper. This legendary assistant went through several incarnations until America in the 1800’s provided the world with the popular, jovial figure associated with Christmas today.

Each country has its own additions to the folk-lore surrounding Santa Claus or Father Christmas. Even the Coca Cola company jumped on the bandwagon in the 1930s and used him to promote their sales, his red and white costume jiving perfectly with their colour scheme! Somehow the idea that he lived in snowy climes was inserted into his biography and today you can visit his grotto in Lapland, Finland, Sweden and Norway… 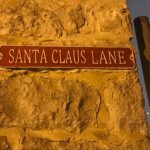 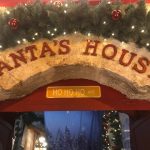 Here in Jerusalem, we have our very own official Santa who lives in the Old City.  He resides in a 14th century building which has been the family home for several generations. Traditional cement “carpet tiles” on the floor are the work of Santa’s grandfather, a Christian Arab, who ran the family’s handmade tile business. The family takes great pride in the fact that more of his handiwork can be seen in the nearby Church of the Holy Sepulchre. 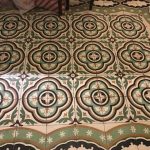 Jerusalem’s Santa, with accreditation from official Santa schools in the United States, is otherwise known as Issa Kassissieh. Issa is the Arabic for “Jesus”, so it seems a fitting role for him to play. At six foot one, he cuts an imposing figure. Issa, who is Greek Orthodox, grew up in the Old City, where Santa Claus is not part of the Middle Eastern Christmas narrative. However, he was aware of the traditions of Santa prevalent in western culture through television and film, as well from his own travels. One day whilst rummaging through his attic, he found his father’s old Santa Claus costume and, after he tried it on, he decided to take an experimental stroll to the nearby Jaffa Gate. The positive reactions he elicited from passersby encouraged him to go back the next day too. Whilst local religious rituals associated with Christmas abound, the fantasy and happy, joyous enchantment was missing. He felt he could fill that gap. 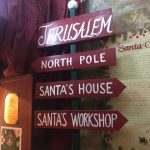 Acknowledging the realities of life in the Middle East, Issa decided reindeer were impractical, but a camel was the ideal mode of transportation. Throughout December he can be seen in various locations around the city astride his four-legged friend. He has also been spotted in different parts of the country, from the Golan in the north to the Dead Sea in the south, promoting Christmas in the Holy Land. A few years ago, he decided to open his own grotto to spread the Christmas magic and good cheer and dedicated a room in his home to the cause. He lovingly and enthusiastically updates it every year. This year’s poignant addition is a couple of masked Santas. Issa himself wears a heavy-duty transparent mask that is camouflaged by his luxurious white beard. 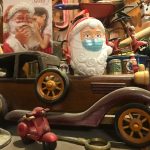 All of his Santa activities are voluntary and his visitors are Jewish, Christian and Moslem. Recent guests range from the current Miss Universe, to the Latin Patriarch of Jerusalem, who awarded him a special certificate in appreciation of his “joyful service for the children of Jerusalem”. On hearing my English accent, Issa enthusiastically asserts he has taken both Prince Charles and Prince William on tours of the Old City.  He also visits schools and kindergartens, hospitals and special needs children in his 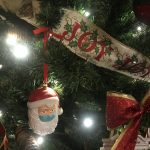 role as Santa. He officiates at various seasonal ceremonies, including handing out free Christmas trees, on behalf of the municipality, at the Jaffa Gate. 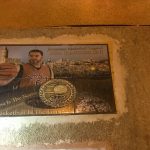 Issa first achieved hero status amongst his local community as a professional basketball player. He briefly played for HaPoel Jerusalem and the Greek team Olympiakos, but he didn’t like the travelling that took him away from home. So, he returned to his local team, De La Salle, and today works as a basketball coach. However, it seems he has always had something of the showman in him, as in his youth he was known to walk around the alleyways of the Old City fielding several basketballs, spinning five of them simultaneously, wowing the crowds. 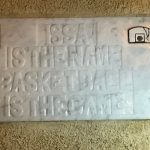 A marble engraved tile at the entrance to his house was lovingly carved by his father; the slogan on it reads “Issa is the name, basketball is the game”. Issa says he would like to add “Jerusalem is the Fame, Peace is the Aim”.

It was a freezing cold night, and pouring with rain, as I made my way home from Santa’s house. The feeling of goodwill and bonhomie seemed to pervade the air of the Old City and the possibility of what could be suddenly seemed more hopeful than merely a winter fairy tale.