What Did The British Do For Us? 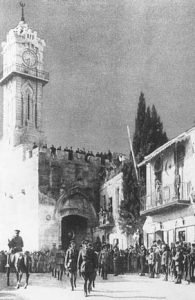 The news of the past few months has been full of stories relating to the British mandate in Palestine. At the end of October, we commemorated the centenary of the Battle of Beersheva, where the bravery and resourcefulness of Anzac forces helped the British win a decisive battle, leading them to conquer Gaza and defeat the Ottoman Turks. In November, we celebrated two anniversaries: the Balfour Declaration, which was a direct result of the British victory in Beersheva, and the fateful British decision to end the mandate, as a result of the UN decision to partition Palestine, which occurred thirty years later. On December 11th, there will be a reenactment of the victorious arrival in Jerusalem of the commander of the British forces. General Edmund Allenby had a tremendous respect for the city. He dismounted from his mighty steed and entered through the Jaffa Gate on foot, declaring “If the Messiah is only going to arrive in Jerusalem on a donkey, then who am I to ride a horse?”

What was it about this little country that caused the British to want to conquer it in the first place?The answer is India. India was the jewel in the crown of the British Empire and it would go to great lengths to safeguard it. The importance of keeping trade routes to India open was paramount. When the Turks entered the First World War, the British were worried this may lead to the blocking of the Suez Canal. In response, they developed a plan to create a land bridge between the Mediterranean and the Persian Gulf. It would provide an alternative to the Suez Canal and allow speedy deployment of troops to the Gulf, which was the forward line of defence for the British in India and the focus of its main oil interests.

Palestine was the key. Successful defence of the Sinai Peninsula from combined Ottoman and German attacks reinforced that view and the British-Anzac Egyptian Expeditionary Force was formed under British command. In addition, once Palestine was under their control, the British forces would then be able to join up with their troops in Syria. The thirty years that Palestine was ruled by the British were significant in terms of its development. Whilst British government policy often discriminated against the Jewish population of the country, local administration and bylaws helped propel it from being a backwater of the Ottoman Empire into the twentieth century.

Jerusalem is known for the striking white stone buildings which make up the city. It was actually a British ordinance

of 1918, that all new buildings were to be built or faced with the local “Jerusalem Stone” that is responsible for this clean, uniform look. A few months into the mandate, the British drew up a master plan for Jerusalem, which included bringing piped water to the city for the first time and building a permanent market in Mahane Yehuda, complete with the very first public toilets!

They also introduced the very English idea of “garden suburbs”, whereby a family home would be built surrounded by a garden and greenery. The adjacent streets were to be lined with trees and have a central grassy bank or island; public parks were also an important element of this design. Some of these Jerusalem neighbourhoods still exist and preserve features of the original plan, such as Bet HaKerem and  Rehavia. Others, like Bayit Vegan, Talpiot and Meah Shearim have been built up in such a way that erases all vestiges of the original layout. 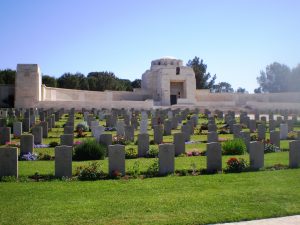 By 1945 there were 100,000 British troops in the country. The six beautifully tended British Commonwealth graveyards in Israel (and two more in Gaza) bear witness to those who were killed here and in other regions of the Middle East. Private Harry Potter lost his life in Hebron in 1939, during the three year Arab Revolt against British rule that started as a protest against Jewish immigration. He is buried in Ramla cemetery and busloads of tourists go to pay their respects to him daily. A less well known grave is that of William Shakespeare, a 41 year old driver from Nottingham who was killed in May 1948 and is buried in Jerusalem.

A recent archaeological excavation near Ramla unearthed a  hundred year old rubbish tip. Located just outside a former British army base, the archaeologists were amazed to discover that 70% of the garbage consisted of empty bottles of alcohol. It seems that gin, whisky, wine and beer were imported from Europe to supply soldiers in the camp. This is the first time such a find has been uncovered and gives us a clear indication of how the soldiers relaxed when off duty. 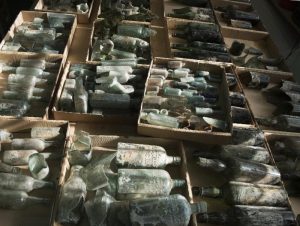 Another very recent piece of news is US President Donald Trump’s recognition of Jerusalem as Israel’s capital. Ironically, it was only under the British that Jerusalem was once more restored as the country’s capital after 700 years of Arab rule. It remains to be seen if today’s British prime minister will endorse it with the same enthusiasm. In his victory speech in December 1917, General Allenby declared “every sacred building, monument, holy spot, shrine, traditional site, endowment, pious bequest, or customary place of prayer of whatsoever form of the three religions will be maintained and protected.” It is often said that history repeats itself and one hundred years later, almost to the day, Israel’s prime minister Benjamin Netanyahu emphasized the same point: “I also want to make clear: there will be no change whatsoever to the status quo at the holy sites…Israel will always ensure freedom of worship for Jews, Christians, and Muslims alike.” Let us hope that once the knee jerk reactions are over, a new era will begin where we can indeed focus on what it is that unites us with our neighbours and finally put an end to the centuries of strife and senseless warfare.