I am often asked where I most like to guide outside Jerusalem. With a country so varied and beautiful as Israel, it is not an easy question to answer, but undoubtedly one of my favourite spots is Caesarea and its surroundings. Many people are familiar with the site as the place where the Roman King Herod built his stunning water-front palace and where he allowed his artistic creativity free reign, as opposed to Jerusalem which he built with Jewish religious sensitivities in mind. One only has to marvel at the larger than life statues, the Roman theatre and frescoed hippodrome to understand that Caesarea is where Herod’s alter ego was unleashed. Caesarea was seen by the Jews as the antithesis of holy Jerusalem, a den of iniquity and the place where Roman and Jewish cultures clashed. The Crusaders also left their mark on Caesarea and their moat still surrounds the northern part of the old city. Pagan cultic deities were worshipped here and the city also played an important part in the development and history of Christianity, particularly after the fall of Jerusalem when it became the country’s capital. Because there is so much to see, visitors are often unaware of the many additional areas of interest outside the national park, so read on to learn more.

Modern Caesarea is once again avowedly secular, albeit with a small, but vibrant modern Orthodox community. What is less well known is the fact that Caesarea also has an important Jewish history. It was in Caesarea that the Great Revolt broke out in 66 CE/AD, when the Jews attempted to purchase the land next to their synagogue and were rebuffed. The land in question was owned by a pagan Greek and not only had he repeatedly refused to sell the land to the Jews but he had put up all kinds of buildings which obstructed their access to the synagogue. By this time Caesarea had a very mixed citizenry of Jews, Pagans and Christians. Herod had successfully managed the diverse population throughout his empire, but after his death a series of inexperienced and ineffective leaders were unable to control the tensions that erupted between the disparate segments of society. When the Jews offered a way above market- value price to purchase the land, which was owned by one of the pagan inhabitants of Caesarea, not only were they turned down, but the next day, a Friday, the pagans sacrificed a bird on an upturned chamber pot as the Jews went to their evening prayers. This was a tremendous insult because it was a parody of the sacrifice a leper would have to make when he went to the temple. Contemporary anti-Jewish literature claimed that the Jewish exodus from Egypt was not as told in the bible, but rather they were thrown out by the Egyptians because they were lepers! Riots ensued, during which 20,000 of Caesarea’s Jewish citizens were killed. An incompetent local procurator, a Roman named Floris, added fuel to the fire when he looted funds from the temple in Jerusalem and before they knew it, the Romans had a fully fledged revolt on their hands!

Almost 70 years later, during the Bar Kochba revolt 132-135 CE/AD, the Romans put to death ten prominent Jewish leaders in the city’s hippodrome. The nearby town of Or Akiva takes its name from Rabbi Akiva, one of the generation’s most esteemed sages who was amongst them.

Perhaps Caesarea’s best known icon is the Roman aqueduct which brought water to the city from springs near the present day town of Binyamina. Remnants of it can be seen on Aqueduct Beach, a short distance from the national park. Most people don’t realise what they see is only one of two aqueducts that supplied Caesarea. The second one, built later on by the Byzantines, brought water from springs north of Caesarea near Ma’agen Michael. It was lower in height but at this point runs parallel  to the first, it is clearly visible, although easily mistaken for a sand dune. The water system provided both drinking water and water for agricultural needs. Part of the original 23 km channel has been restored and it is possible to walk through it, with the cool, crystal clear water providing a welcome relief during the hot days of summer.

A walk along the sandy beach, which consists of miles of natural coastline and stunning scenery, yields a treasure trove of goodies. It is impossible not to notice the huge quantities of red pottery sherds which are washed up along the shore, testimony to the large population that once lived here. Some suggest there were as many as 100,000 inhabitants when Caesarea was in its heyday during the Byzantine period. You are almost guaranteed to find a jug handle or piece of mosaic as you stroll along. Remnants of earlier dwellings are also clearly evident along the sandstone (kurkar) cliffs.If shells are more your style, there are no end of beautiful specimens waiting to be collected.

Between the Aqueduct Beach and the national park is the area considered to have been the Jewish quarter throughout Caesarea’s existence. In the third century a school for rabbinical studies was established here and during the Talmudic era the city had a well-known Jewish community that made Caesarea famous throughout the Jewish world. Remains of a synagogue with a mosaic floor dating from the fifth century can still be seen. The site seems to have served as a synagogue since the time of King Herod, although renovations were carried out several times over the years. In the third century, the synagogue was adorned with a different  mosaic floor with an inscription on it that scholars have identified as a list of the names of the priestly families that served in the temple.  Perhaps it was in this place that the argument with the pagan Greek community which sparked the Great Revolt  occurred. It must have been an awe inspiring experience to worship here with the sound of the crashing waves only a few metres away.

A few hundred metres to the east of the beach, in the midst of residential Caesarea, a wonderful mosaic “rug” has been discovered. Decorated with medallions of birds and and framed with pictures of wild beasts and fruit trees, it is thought to have been part of a sumptuous villa from the sixth century. 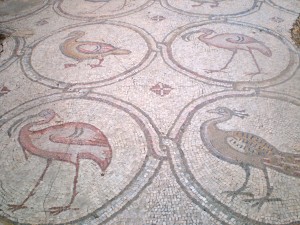 A short distance away are two very special art museums open to the public free of charge. The first of the two, a magnificent building built in Spanish Colonial style exhibits largely Spanish and Latin American art and sculptures, including some pieces by Salvador Dali. In the basement of the building is a permanent exhibition on the history of Caesarea. The second structure, even more impressive in appearance, displays art from the 16 -18th centuries depicting biblical themes. 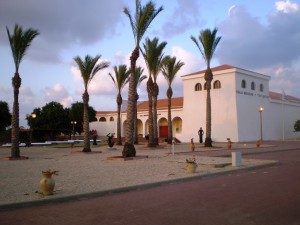 Many people have been enchanted by the beauty of Caesarea throughout history. In more recent times Baron Edmond de Rothschild was one of them. Known throughout the country by the moniker “HaNadiv” or “The Benefactor” for his investment in the colonies of the early Jewish pioneers in the late nineteenth and early twentieth centuries, he is said to have spent the modern day equivalent of 50 million dollars in supporting land development in Palestine. In 1948, when Israel became an independent nation the baron gifted all his acquisitions to the state, with the exception of Caesarea. He had a special affinity for the area and chose to build his home in Israel there. In addition, he established a family foundation which using private funds continues to develop and improve Caesarea lands. Any profits made are channelled into education, welfare and institutions of higher education throughout the country. The communities of Or Akiva and Jisr a Zarka (a town of black Bedouin inhabitants) immediately adjacent to Caesarea, also benefit from the foundation’s largesse.

The overall area of Caesarea is approximately 35,000 dunams (or almost 9,000 acres) and its residential area is growing rapidly. Boasting the country’s only 18 hole golf course and an enviable standard of municipal services, new neighbourhoods are being built at an alarming rate. Whilst the earlier sections house comfortable but modest dwellings, the newer architecture reflects the Disneyland approach of mercenary contractors and the fantasies of the nouveau riche. It does however, make for an interesting tour!

Closeby is Sdot Yam, the kibbutz where Hannah Szenes briefly lived. There is a small archeological museum there and a memorial room. Both are slated to be expanded and updated soon. Born in Hungary in 1921 to an assimilated family, anti-semitic incidents in Budapest led to Hannah’s involvement in Zionist activities and she came to Palestine in 1939, when she graduated high school. First she went to agricultural school in Nahalal before joining the kibbutz. When news of the fate of European Jewry reached her she decided to volunteer for the Palmach. She was one of twenty six agents parachuted into Europe to penetrate enemy lines. Her goals were to gather intelligence, help prepare an escape route for downed Allied pilots and rescue Jews and organise them for immigration to Palestine. Dropped in Yugoslavia, she made her way to her native Hungary, where the Jews were about to be deported to Auschwitz. Caught with a radio transmitter in her possession, she was handed over to the Gestapo. After five months of interrogation and torture she was executed on November 7th 1944.

Only after her death did the kibbutz members open the suitcase she had left behind for safe-keeping and there they discovered her notebooks, her diary and her poems. The most well known of her poems has been set to music and is called “Walking to Caesarea”:

My God, My God, I pray that these things never end,
The sand and the sea,
The rush of the waters,
The crash of the Heavens,
The prayer of Man.