When one thinks of Jerusalem many images spring to mind, but a city of windmills is definitely not one of them. Of course, the famous Montefiore windmill in Yemin Moshe is a well-known landmark, but actually, by the early 1870s, there were a number of windmills in the city in very close proximity to one another.

The windmill in the centre of Yemin Moshe was built in 1857. It was shipped over from Ramsgate, England by Sir Moses Montefiore. He built it to enable those Jews who were to live in his new neighbourhood a way to make ends meet by grinding wheat for flour. The parts for the windmill were transported to Jerusalem piece by piece by camel and donkey from the port of Jaffa.

There were several horse-powered windmills operating in the city at this time, but until the construction of the Montefiore windmill there had never been a Jewish-owned mill. As well as enabling the local Jews to earn a living, it provided a place for Jerusalem Jews to grind their wheat and it broke the Arab monopoly. Obviously, this new windmill, boasting the best of British technology and far more advanced than the others, was not popular with the local Arabs who brought in a sorcerer to curse it. He promised that when the rains came it would collapse. Although his prophecy did not come to fruition, the Arabs claimed that the windmill and everything connected to it was the work of demons.

Once the windmill was erected, it required someone to run it and an advert was duly placed in the Jewish Chronicle in England:

“For the Holy City of Jerusalem, a Jewish miller who thoroughly understands the working of a windmill… giving references respecting ability, moral and religious character.”

In fact, two men, who came over from Canterbury, were entrusted with the job until it could be leased to a local.

From the very beginning the windmill was beset with problems, not least of which, was the fact that there was often not enough wind to power the sails. Another difficulty arose because it was more suitable for grinding English wheat than the local variety, which was much harder. It continued to function as a mill until 1876, when it was superseded by the 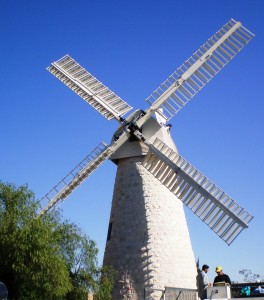 new steam-powered windmill brought into the German Colony by the Templers. Over the ensuing years it fell into disrepair.

In 1948, during the fighting that took place before the British withdrew from Palestine, the Hagana realized its strategic advantage and built a reinforced military post on the roof. When Sir Alan Cunningham, the British High Commissioner, returned from his Sunday morning worship at the nearby St. Andrews Church, he was amazed when he caught sight of the addition and sent three soldiers to blow up the windmill.

As fate would have it, the soldiers picked for this task were all from Ramsgate. When they saw the explanatory plaque on the wall that mentioned how Montefiore built it and that it was originally brought over from Ramsgate, they refused to carry out their mission. In the end, just the rooftop extension was blown up by the British the next day. It was quickly rebuilt the same night by the Hagana, this time inside the structure, under the roof of the mill.

Today, the Montefiore windmill has been restored, not only do its sails rotate, with a little extra help from a generator, but it also grinds flour once again. A lengthy project, costing five million shekels, overseen by the Jerusalem Foundation, has led to this iconic landmark coming to life once more.

A few minutes walk away at number 6 Emek Refaim, you can see the site where the first steam-powered windmill was established. This mill was owned by Matthias Frank. It is no longer standing, but on the west side of the house you can still see the remains of the walls. 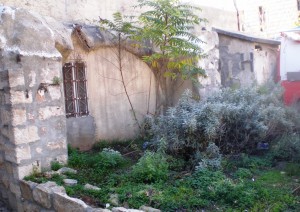 Frank was one of the first German Templers to settle in Jerusalem. He had originally bought the land that was to become the German Colony for his father-in-law, who wanted to use it for agricultural purposes. Unfortunately the voyage from Germany to the Holy Land proved too taxing an endeavour for the older man, who died en route. So the Templer community bought the land from him and divided it into building plots for houses in the German Colony.

Until the establishment of their own neighbourhood in 1873, the Templers had lived in the Old City and in newer neighbourhoods outside the walls like Mishkenot Sha’ananim, built by Sir Moses Montefiore. Perhaps it was seeing the problems caused by the Montefiore windmill close by that convinced Matthias Frank to import his steam-powered one.

Another windmill that is depicted on the 1875 Baedeker map of Jerusalem is in Rehavia, on Ramban Street. Built, owned and administered by the Greek Orthodox Church as a social project to provide the poor with flour and bread, this mill used a combination of engine-power and wind. It went out of use in 1873 when the steam-powered one began to operate in the German Colony. Today there is a small shopping centre in the building.

The original tenant was Eric Mendelsohn, who was forced to flee Berlin where he had a thriving practice with 40 architects working for him. He was one of the main proponents of the “International Style” and buildings he designed are protected properties in Germany still today. In the 1920’s he designed Einstein’s astrophysics laboratory in Potsdam, for which he received international accolades. He purchased this plot of land in Jerusalem for his private home because it reminded him of there. His study was located in the top part of the windmill under the dome. 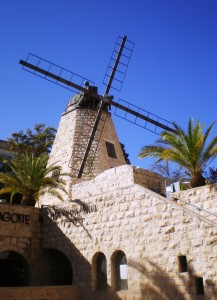 Mendelsohn designed many buildings in his new homeland, including Chaim Weizmann’s personal residence in Rehovot. In Jerusalem, he planned the home and library of his former patron in Germany, Salman Schocken, who lived nearby on Balfour Street. He also designed Hadassa Hospital on Mount Scopus, which, at the time, was the most advanced and functional hospital in the Middle East.

However, the Yekkish Mendelssohn couldn’t cope with the Levantine mentality of Palestine and left in 1941 after only six years in the country. He died in 1953 in the US. During the 1950’s and 60’s his former home housed the Dutch consulate and the consul’s residence.